The Hong Kong economy is estimated to have contracted for a fourth consecutive quarter with a quarterly drop of 0.1% (Previous -5.3%), in turn, the yearly rate is expected to have posted a 9% drop from a year earlier (Previous -9.1%). This comes amid the damage stemming from the coronavirus crisis, while social unrest has also played its part in weighing on economic growth, in which external and domestic demand has taken a hit. This had been underscored by a record decline in private consumption (-14.5% Y/Y) as lockdown and social distancing measures disrupted activity.

On a slightly more encouraging note, goods exports saw a notably smaller contraction of 2.1% Y/Y from the 9.7% Y/Y drop in Q1, given that production had resumed throughout the quarter. That said, the economic outlook remains challenged by the pandemic, particularly as concerns of a second wave begin to emerge. Elsewhere, souring relations between the US and China are likely to constrain economic activity in Hong Kong for the foreseeable future. 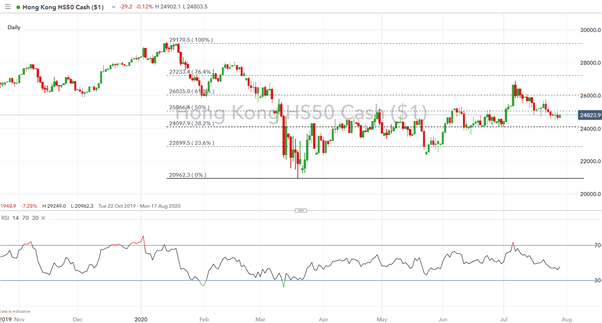 GOLD PRICE OUTLOOK: Gold prices score largest rise in two months as Treasury yields decline Pre-positioning ahead of April US payrolls data may have been at play Upswing may unravel if sticky wage inflation spurs […]

Bitcoin (BTC/USD), Ethereum (ETH/USD), and Alt-Coin Analysis and Charts: Bitcoin – battling back but losing ground. Ethereum – up, up, and away. Dogecoin – potential for a huge bout of Musk-inspired volatility? SEC – cryptocurrency […]